As a programmer you want to know how your programs affect the world, when you do a change to the code and deploy it you want to know how it would affect your users, if you have many users and you use canary deployments and gradual deployments you want to know if this 1% of users that received your feature were they happy or not, this 1% is a sample, is this sample good enough? Can you infer from it to the broad population of your users? For this we need to know how to do sampling good, and to check if our sample is good or not, yes as programmers we also need to know about confidence intervals and the central limit theorem and hypothesis testing - but hold on we are not mathematicians we are programmers, this why this is for you because this is statistics for programmers.


We are especially interested in the relation between samples to the actual population, so that we can take samples of our users for example and deduce from it on the whole population.

We are collecting evidence from samples the more evidence we have the more confident we are in our actual population mean.

We use numbers to describe our world, in statistics we try to organize and understand the numbers and take conclusions and ask questions on them.

We cannot see the whole population numbers, so we use sampling.

Looking at all the numbers or charts is not enough, so we try to come up with a very few numbers like the mean and medium which is a single number describing our whole dataset.

Another number is telling us how do all the numbers we have related to the simple single number we have the standard deviation is the average distance for each data point and the mean of the dataset.  How much variation we have in our data.

Normal distribution means our data is symmetrically distributed around the mean, so we can look at a picture, and we can estimate how many numbers we expect at a certain part of the distribution. 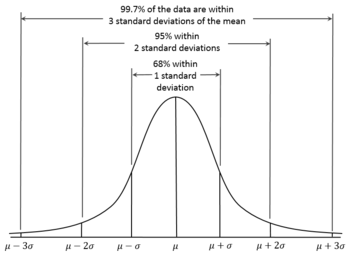 def zscore(specificDataPoint) = stdDev(dataPoint) // from the mean.
z-scores are for a specific data point how many stddev is it from mean.

Probability is the ratio

Binomial experiments, in each experiment we have only 2 possible outcomes - like the stock would raise or the stock price would fall.

How many users should we sample 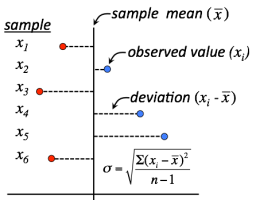 Assures you get a great estimation of population mean from samples given you take enough samples.

Could we use samples to direct us to the population mean?

The more samples we take the closer the sample mean to the population mean.

If you increase sample size => the curve becomes more normal the curve is taller and narrow so stddev is smaller.

The larger the sample size the more confidence we have in our results.

Standard deviation of the sample mean

So we deployed a new feature, and we want to know how many are happy, we can't ask all our users, so we are going to sample our users and ask them : "are you happy with this new feature?"

As we don't know the real population mean answer we estimate that each sample has a standard error and it relates to the sample size.

If we say that we have normal distribution to the mean of the samples than we know that 68% of sample means would fall within 1 standard deviation of the population mean.

We plug the n to the above formula.

The standard error allows us to set a range around the population proportion p + stddev and p - stddev this is the standard error.  If  so is we see that in our samples 68% of our sample means are not within the 1 standard deviation it could be that we have a problem in sampling or can tell us that the experiment results is different.

Connect the sample to population

A number that tells you how confident you are in an interval.  Confidence intervals are all aobut :

1. Do a sample
2. Calculate the mean / proportion of the sample.
3. Calculate an interval round that sample mean

Now depending on the CI we choose 95% for example we then use the formula for the SE only this time it's not SE it's the sampling error and with combination with z score we calculate an interval for which we are going to be 95% sure that the actual population mean would be in that interval.

When we say we are 95% sure are we really sure, we could only be sure if our sampling is true random sample, we can only be sure if users don't change their mind if it's a view of someone we ask for, and then he changes his mind then the sample we did it's not a true random sample that's what happens in polls in politics the pollers say 95% but people are lying people don't go to vote so it's not really 95% assurance.

And what does it mean to be 95% sure of something, that means that if we did the same sample 20 times we are sure that our process would yield the true population vote or result 19 out of 20 samples, because we are only sure 100% of this pole outcome!

Is it real or fake news, is this thing that happened really likely or is it not likely to occur.  How likely is it that a new medicine on COVID-19 that made a few patients recover a few days sooner means it's significant or a result of change.

Significant - Did this just happened by chance or is there something into it, something really happened here and not a mere chance.

We gather data and samples, and we try to deduce if it's significant or not if its true news or fake news.

H0 - null hypothesis the status quo, everything is as usual nothing into it, it's only happening by chance.

Ha - Something special happened here, it's not a mere chance we have real news here.


If the outcome we saw as evidence has less than 5% chance (significance level alpha we choose) then we say Ha is true something is strange here.


Pvalue the probabbility that the outcome we saw would occur by chance.  let's say we find it's 2%

By Tomer April 03, 2020
Introduction Being On-Call is not easy. So does writing software. Being On-Call is not just a magic solution, anyone who has been On-Call can tell you that, it's a stressful, you could be woken up at the middle of the night, and be undress stress, there are way's to mitigate that. White having software developers as On-Calls has its benefits, in order to preserve the benefits you should take special measurements in order to mitigate the stress and lack of sleep missing work-life balance that comes along with it. Many software developers can tell you that even if they were not being contacted the thought of being available 24/7 had its toll on them. But on the contrary a software developer who is an On-Call's gains many insights into troubleshooting, responsibility and deeper understanding of the code that he and his peers wrote. Being an On-Call all has become a natural part of software development. Please note I do not call software development software engineering b
1 comment
Read more

By Tomer February 28, 2020
Recursion trees. Controlling the fundamentals stands at the cornerstone of controlling a topic.  In our case in order to be a good developer its not enough or even not at all important to control the latest Java/JavaScript/big data technology but what's really important is the basics.  And the basics in computer science are maths, stats, algorithms and computer structure. Steve wosniak the co-founder of apple said the same, what gave him his relative advantage was his deep understanding of programming and computer structure, this is what gave him the ability to create computer's which are less costly than the competitors (not that there were many) and by the way there were 3 founders to apple company one responsible for the technical side, one for the product and sales (Steve Jobs) and the third responsible for the company structure and growth, each of the three extremely important, it was not only the two Steve's but that's a topic for another episode. And with t
1 comment
Read more

By Tomer April 14, 2020
A recent book was published this year by Google about site reliability and security engineering, I would like to provide you a brief overview of it and incorporate my own analysis and thoughts about this subject while saving you some time from reading, at least part of it. Take a few of your customers and ask them, what are the top 5 features on my product that you like.  The answer that you are likely to get is, I really like how polished the UI is, or the daily report I get by mail is just fantastic, or since I started using your product I was able to save one hour a day my productivity got up and the share /chat button on document that you added recently is doing a great job. Your customers are very unlikely to answer the question of what top 5 features of my product do you like with I really like its security or I really like that we lost no chat messages since I started using it.  No real customer will even think of it, moreover, assuming you did a very good job, they won&#
Post a Comment
Read more